How can we create a more sustainable, affordable and healthier charcoal making process for the local Maasai communities of Longido, Tanzania?

So Much Waste, So Little Energy

The Maasai own herds of livestock which produce large amounts of waste, often left unmanaged in the environment. The littering of manure promotes the spread of dangerous diseases and is hazardous to public health. At the same time, the Maasai have no sustainable form of energy, relying mostly on burning firewood or charcoal for cooking and lighting. This project looks to use carbonization to convert animal manure into a low-smoke charcoal that diverts animal waste from the environment, reduces deforestation and is healthier for the local communities.

Because I was designing for a different culture, I had to do research to ensure that my design was culturally appropriate and suited the needs of the local people. I conducted secondary research in the form of literature reviews, as well as doing primary research through expert interviews and focus groups with locals. I also worked with classmates to summarize our findings in a mindmap. The Maasai are nomadic pastoralists who rely on their livestock for their living. They are very traditional people who care a lot about maintaining their culture and their traditional lifestyle. 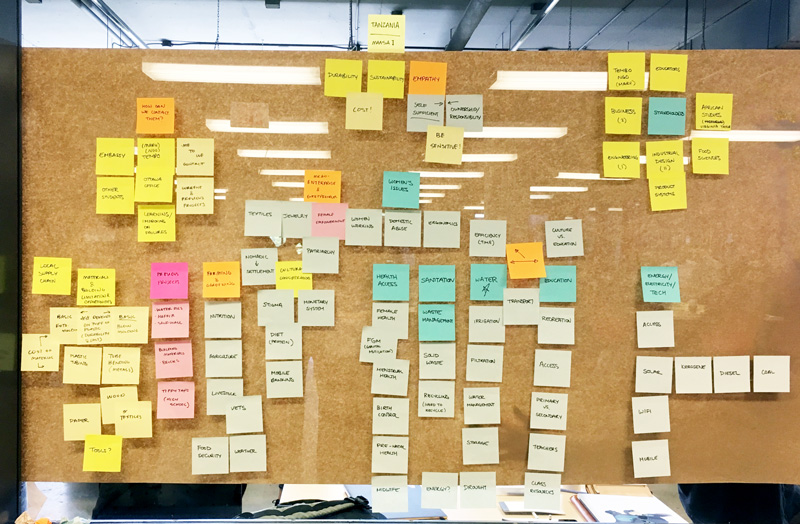 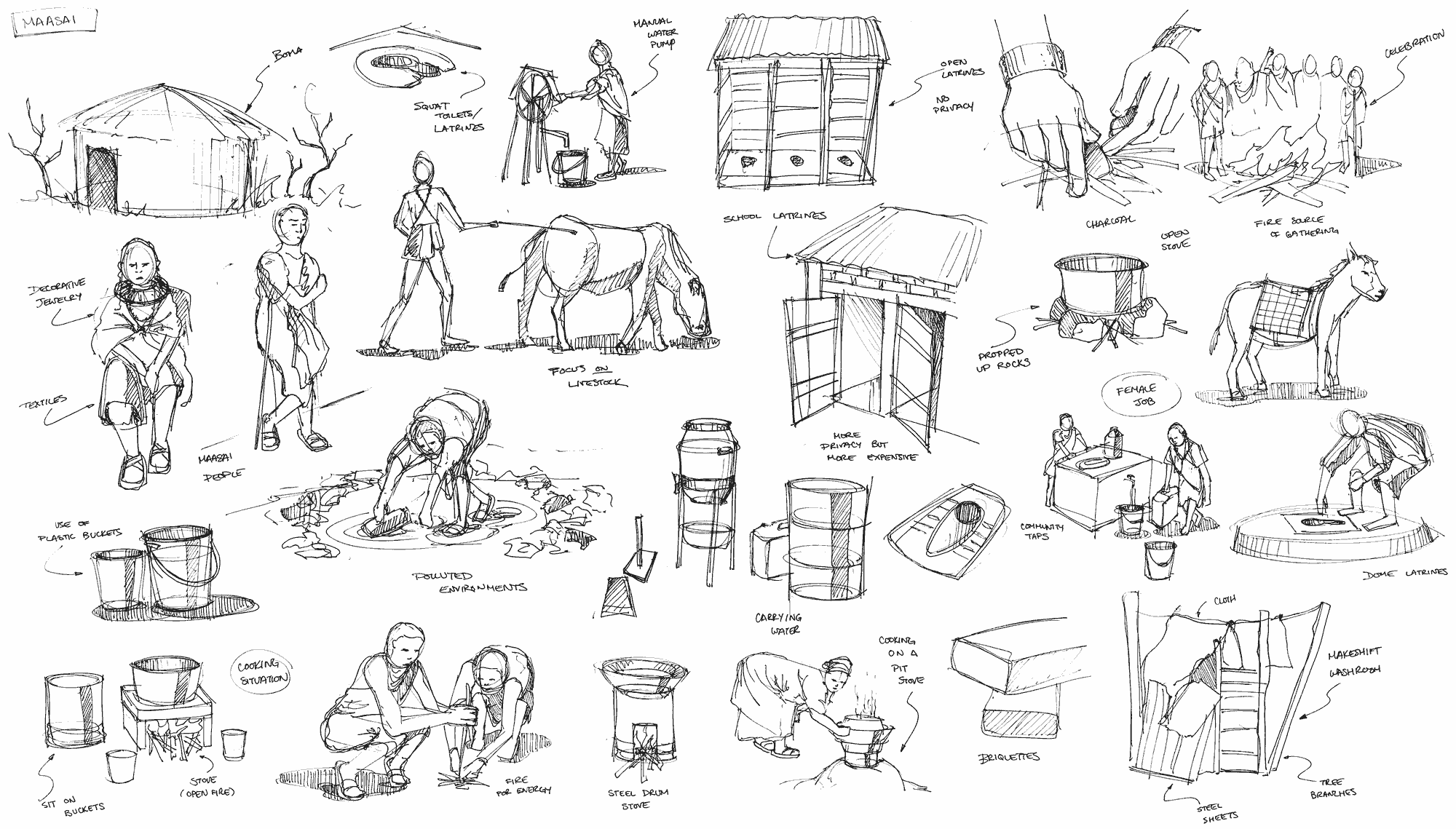 The Maasai currently walk for hours in search of firewood to cook their meals, and using the firewood they collect can be detrimental to their health. The Maasai often cook indoors, inside their boma homes which are made with no ventilation and minimal windows. This causes smoke to accumulate, leading to respiratory illnesses and eye infections. Others used to use charcoal, which produces less smoke, but with the Tanzanian goverment's regulations restricting wood charcoal production, the price of charcoal has increased, making it a costly expense for most families.

Inspired by biochar projects I've seen online, I originally wanted to use human waste as a possible carbonization fuel. However there were strong cultural barriers preventing the Maasai from wanting to explore any idea involving human waste. To combat this, I pivoted my idea to using animal manure, which the Maasai were very comfortable with using since they use it to build their homes. Using manure provides users with an alternative to wood charcoal and it allows them to make it on their own with a resource that is abundant in their environment.

Carbonization works to burn materials in a low-oxygen environment in order to concentrate the carbon in the material and produce char. The process produces signifcantly less smoke and is exponentially quicker then traditional charcoal making techniques, which release lots of air-borne particulates and can take anywhere from days to weeks to complete. An example of a carbonizer is the Top Lit Updaft (TLUD) Kiln. 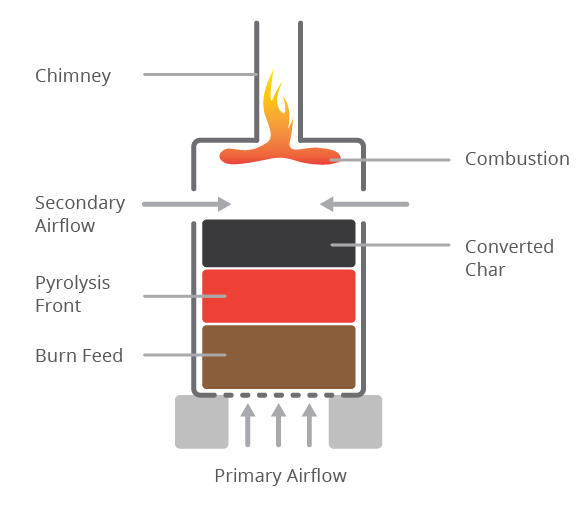 Before ideating on ways to implement the carbonization, I wanted to ensure that I could replicate and prove the concept. To do that, I built a small-scale TLUD Kiln using paint cans and soup cans and tested burning it with dried corn cobs as the feedstock.

Since my concept had been tested to work, I focused and started ideating on different areas to improve the kiln: 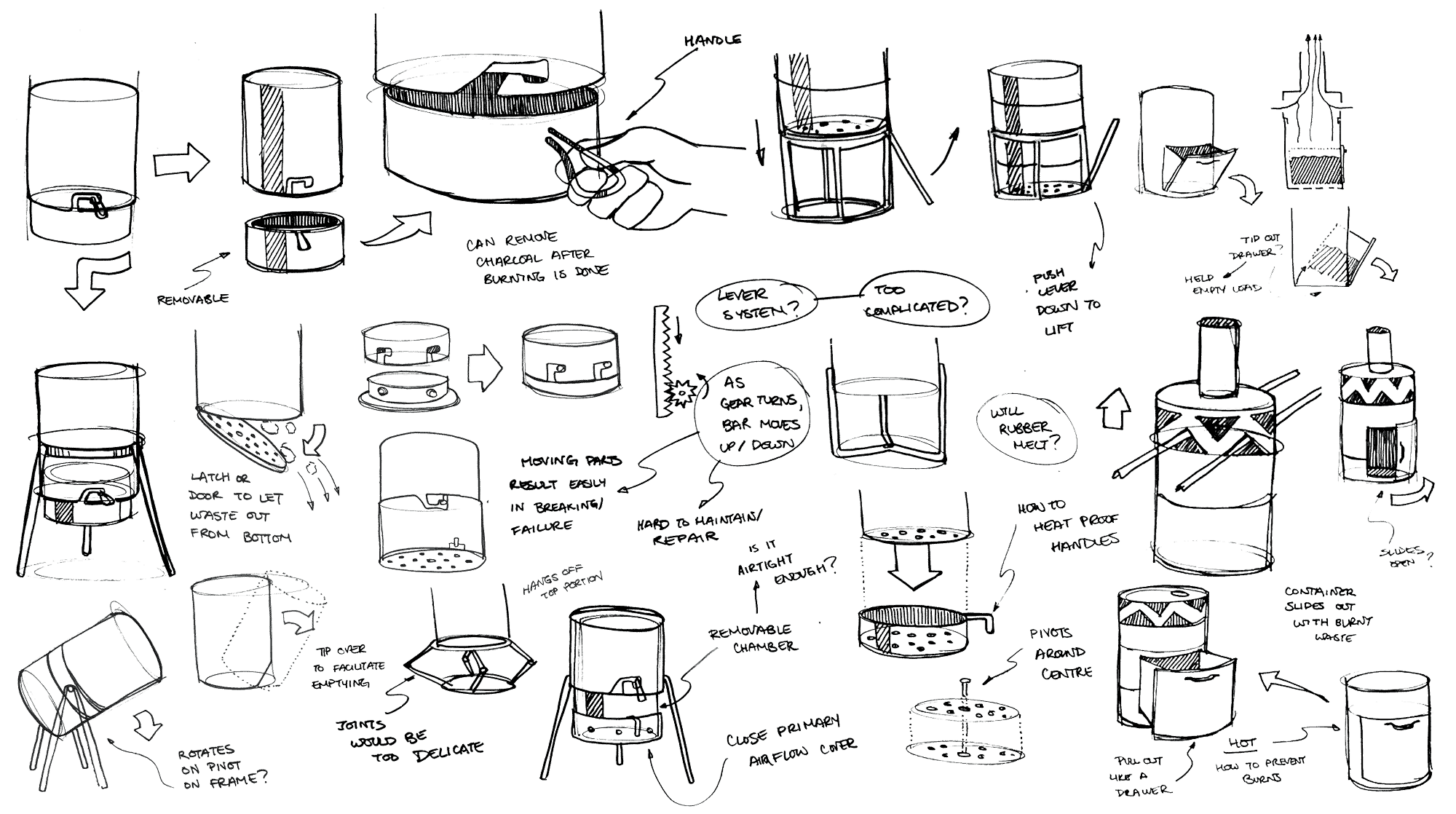 To help determine the scale and structure, I built a full scale prototype with an adjustable frame. This allowed me to test with users of different heights to determine an appropriate size for the overall structure, and what heights made for easiest handling. At the same time I also tested some prototypes for unloading and airflow control, including a hinged door and a rotating air cover.

I was fortunate enough to have the opportunity to go to Longido in December to present my ideas to the Maasai in the community. I conducted burn tests with a Maasai woman on site using dried maize cobs and also presented my prototype, user testing videos and sketches to a panel of Maasai community members.

The Maasai were very receptive to the idea and expressed a lot of interest in the manure-based charcoal because of the wood charcoal ban enacted by the government. There were no cultural barriers, as I had originally feared, with the idea of cooking with manure charcoal. The women were excited by the idea of a low-smoke solution and the community leaders believed that there was potential in using this method for business. Charcoal is hard to find and comes at a premium price due to the charcoal ban, however the government has not given the people any alternatives so the community is searching for possible solutions.

While in Tanzania, I had the opportunity to tour SIDO Manufacturing Cooperative in Arusha to better understand the local manufacturing landscape. Available technologies included drill presses, metal shears, welding, metal rollers, angle grinders, bandsaws, milling machines, stamping and more. In Longido, there are  local welders and hardware stores where metal tubing, rebar, nuts and bolts, as well as sheet metal can all be purchased. Local welders can weld, cut, grind and bend sheet metal, tubing and rebar. Talking to the manufacturers allowed me to confirm the manufacturability of my project and get cost estimates for my design. 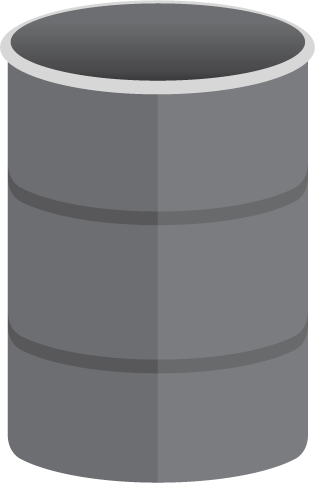 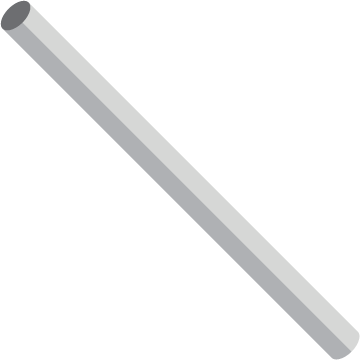 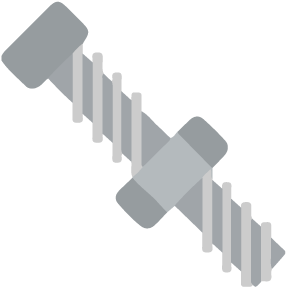 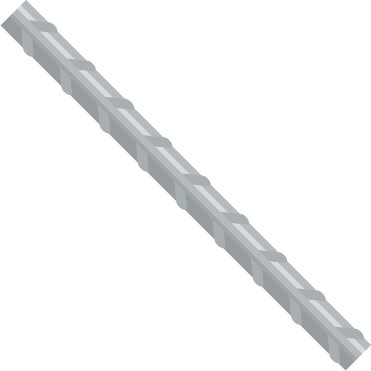 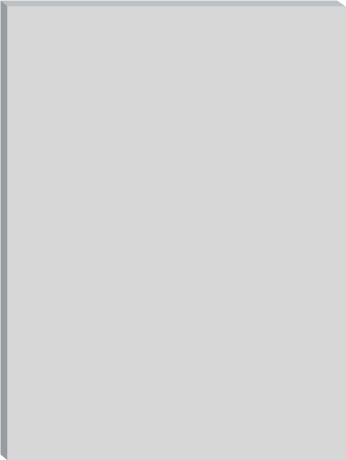 The total cost of the kiln is estimated at around 73,000 TSH or approximately $43 CAD, however the costs would vary depending on region and on local manufacturing. Project Tembo and SIDO Manufacturing Coop both offer micro loans of 300,000 to 600,000 TSH which can be used to help cover the purchasing costs of the kiln. This will increase the accessibility of the product and encourage the Maasai women to start their own micro-businesses and entrepreneurial ventures.

After coming back from Tanzania, I worked on refining my design based on the feedback I received from the Maasai. I added a frame to elevate the entire kiln and accomodate for the Maasai ergonomically, since they do not bend at the knees but at the waist. I increased the size of my kiln to allow for greater yield since the Maasai expressed interest in using the kiln entrepreneurially for starting charcoal micro-businesses. I also added a rotating airflow ring for the secondary airflow so that the user would not have to take off the entire crown while the kiln is burning. Instead, they would only have to rotate the ring to close the airflow, making it safer and easier for the user to operate. 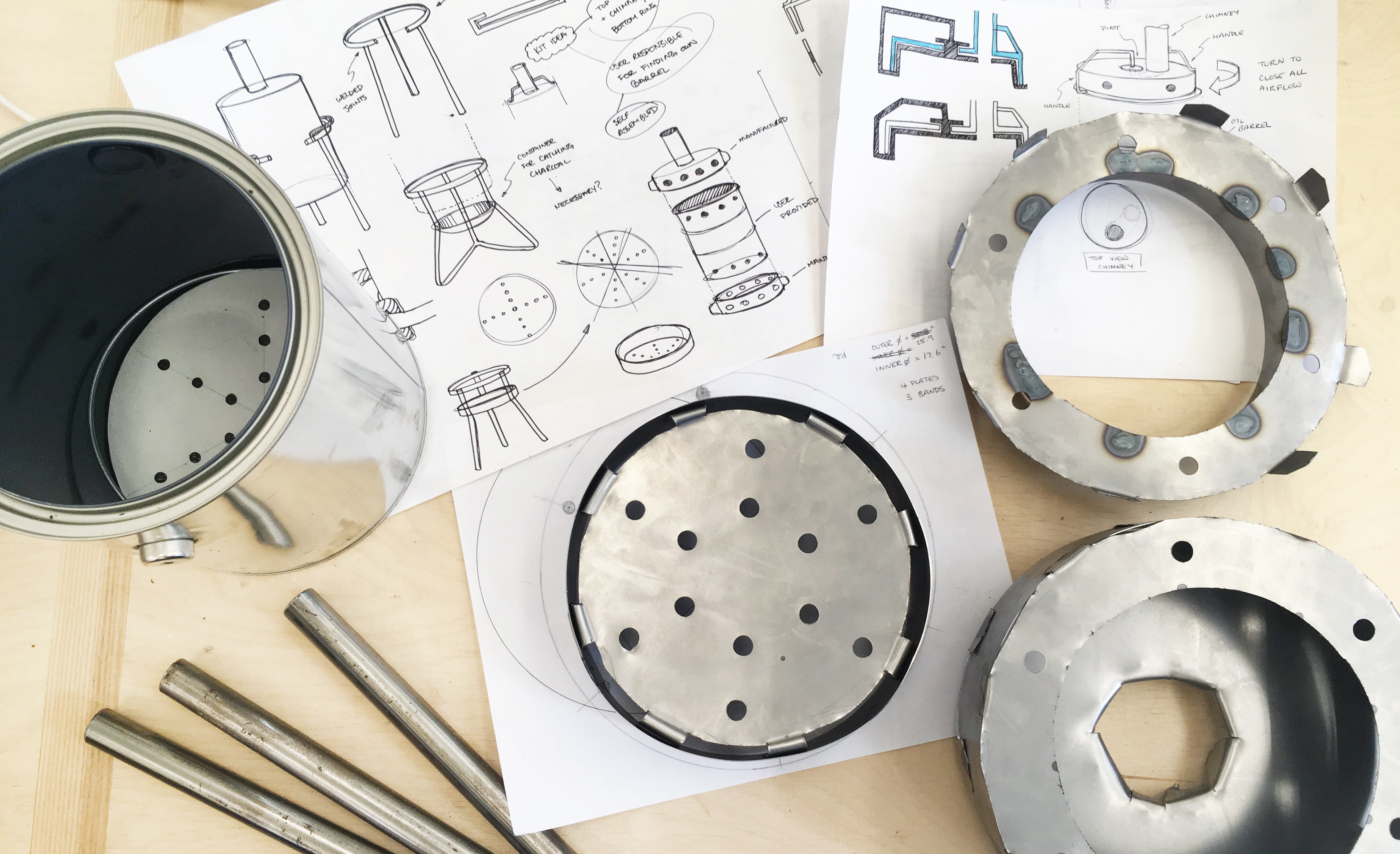 The final design is an entrepreneurial thirty gallon charcoal kiln made for Maasai women in Longido village to use for micro-business use.  It is composed of three parts: the frame, the body, and the crown. The frame is a tripod design that provides stability, elevates the kiln for easier handling and also acts as the primary airflow control. The adjustable airflow cover rotates to open and close the secondary airflow, while its tightness can be adjusted by turning the rebar handle. The rebar handles facilitate grip and also provide an area for the Maasai women to customize their kiln by adding fabric wrappings or beading. The entire product is made completely using locally sourced materials and manufacturing techniques, allowing the product to be made by Tanzanians for Tanzanians. The larger size also enables the women to start their own micro-businesses, making and selling charcoal. 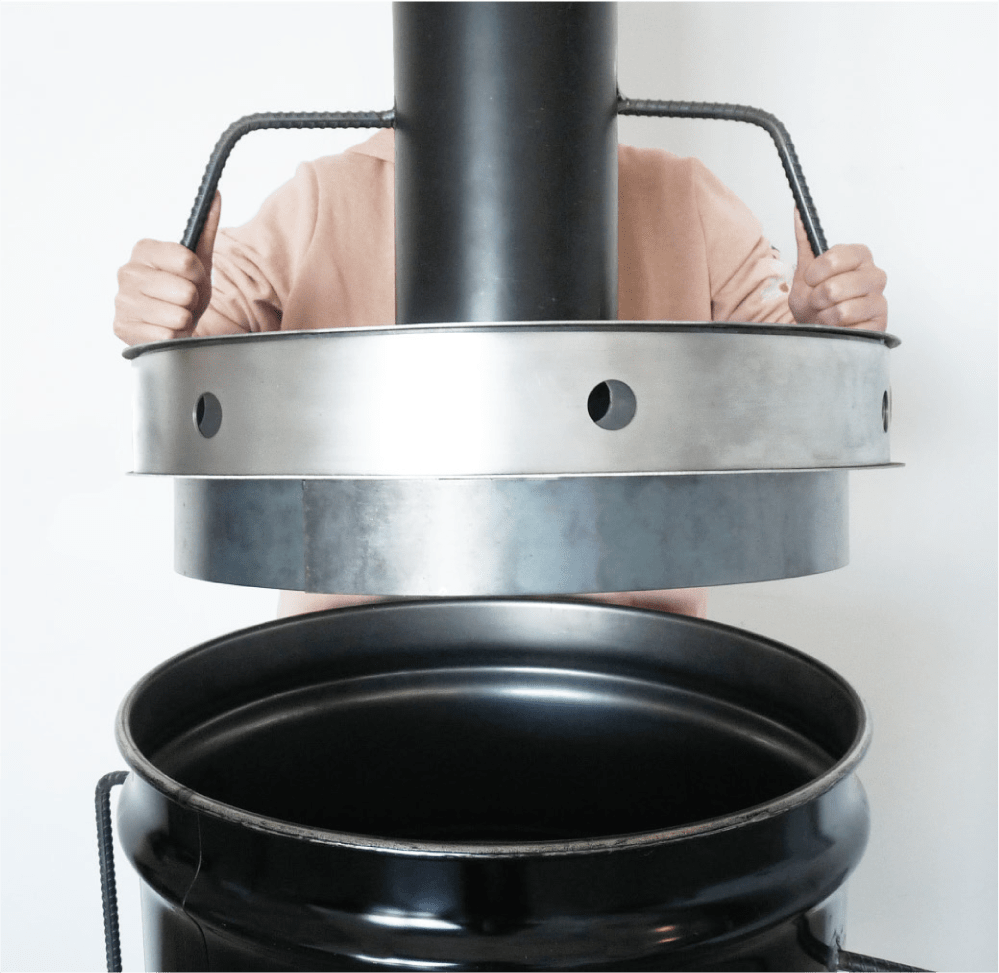 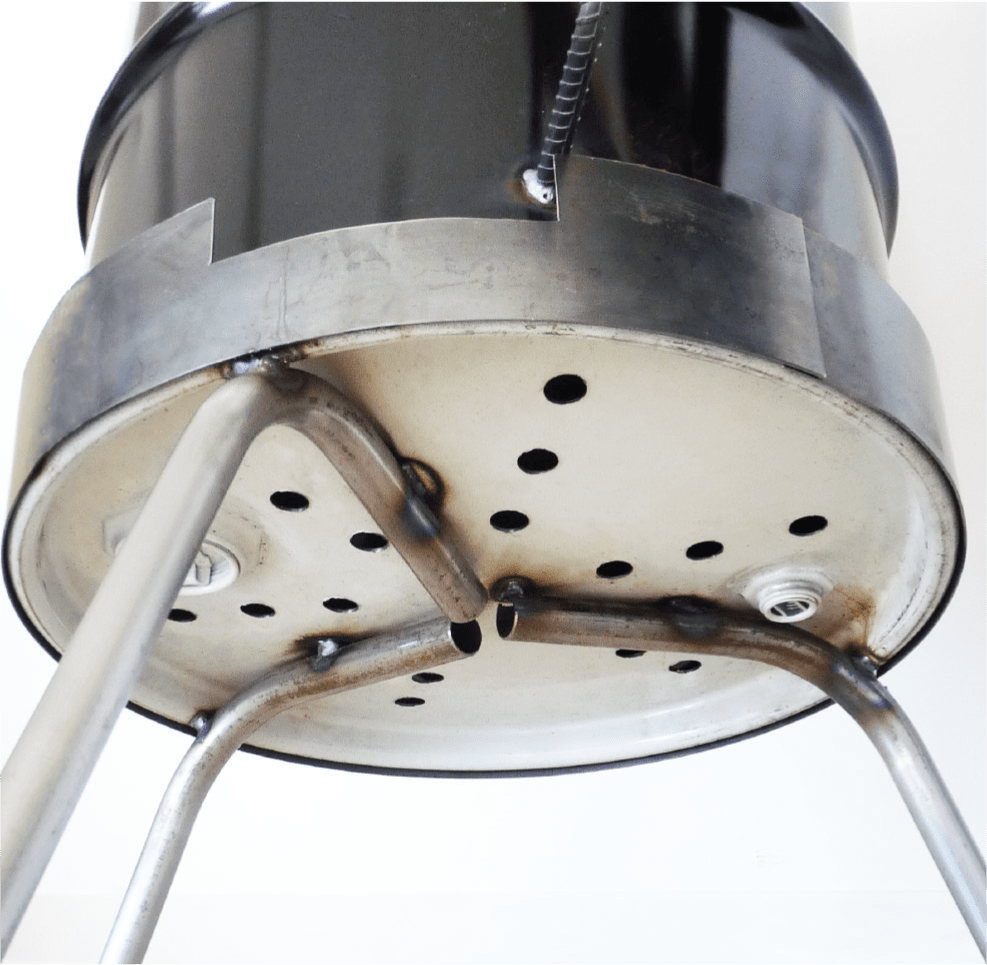 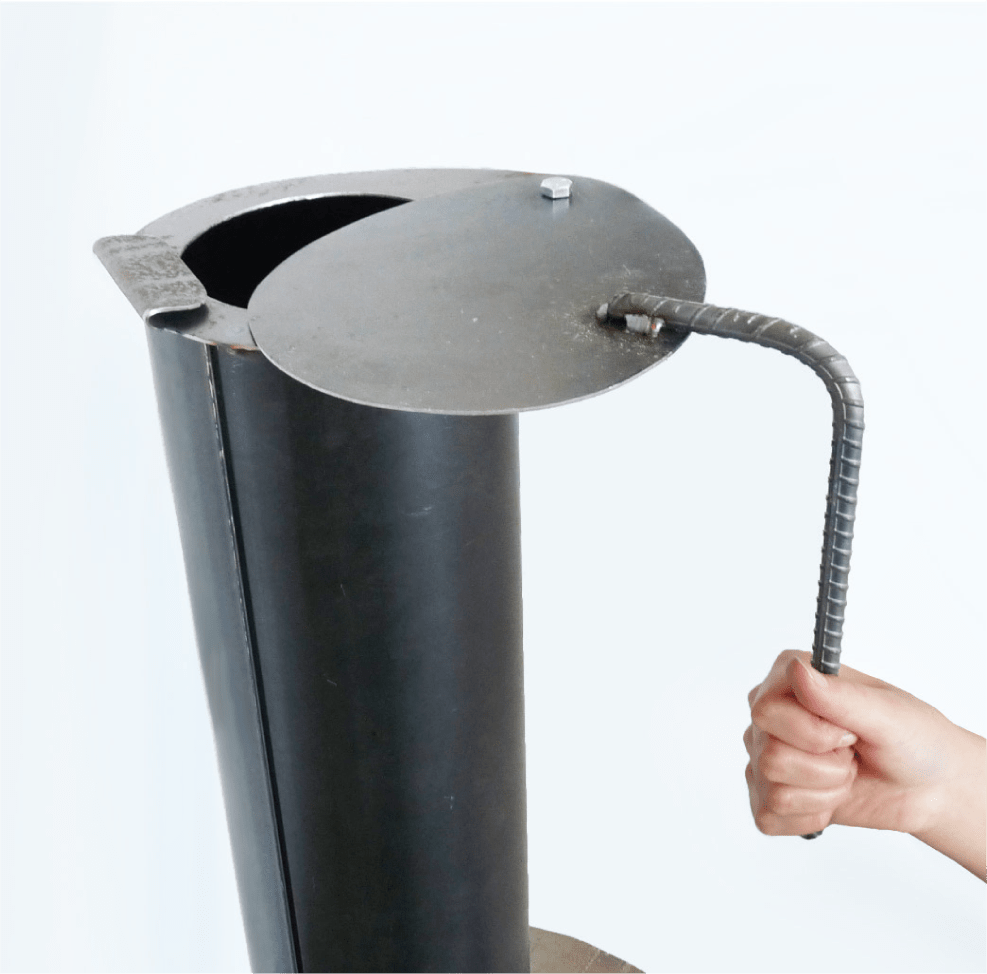 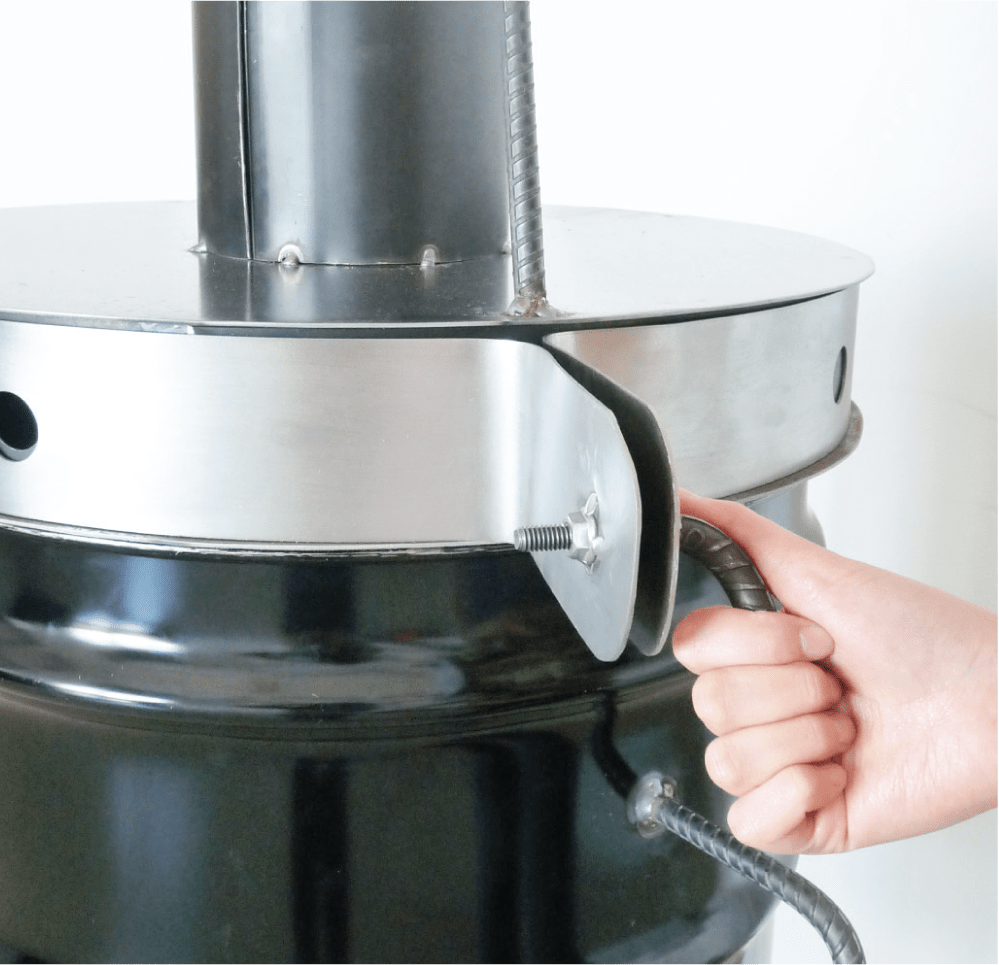 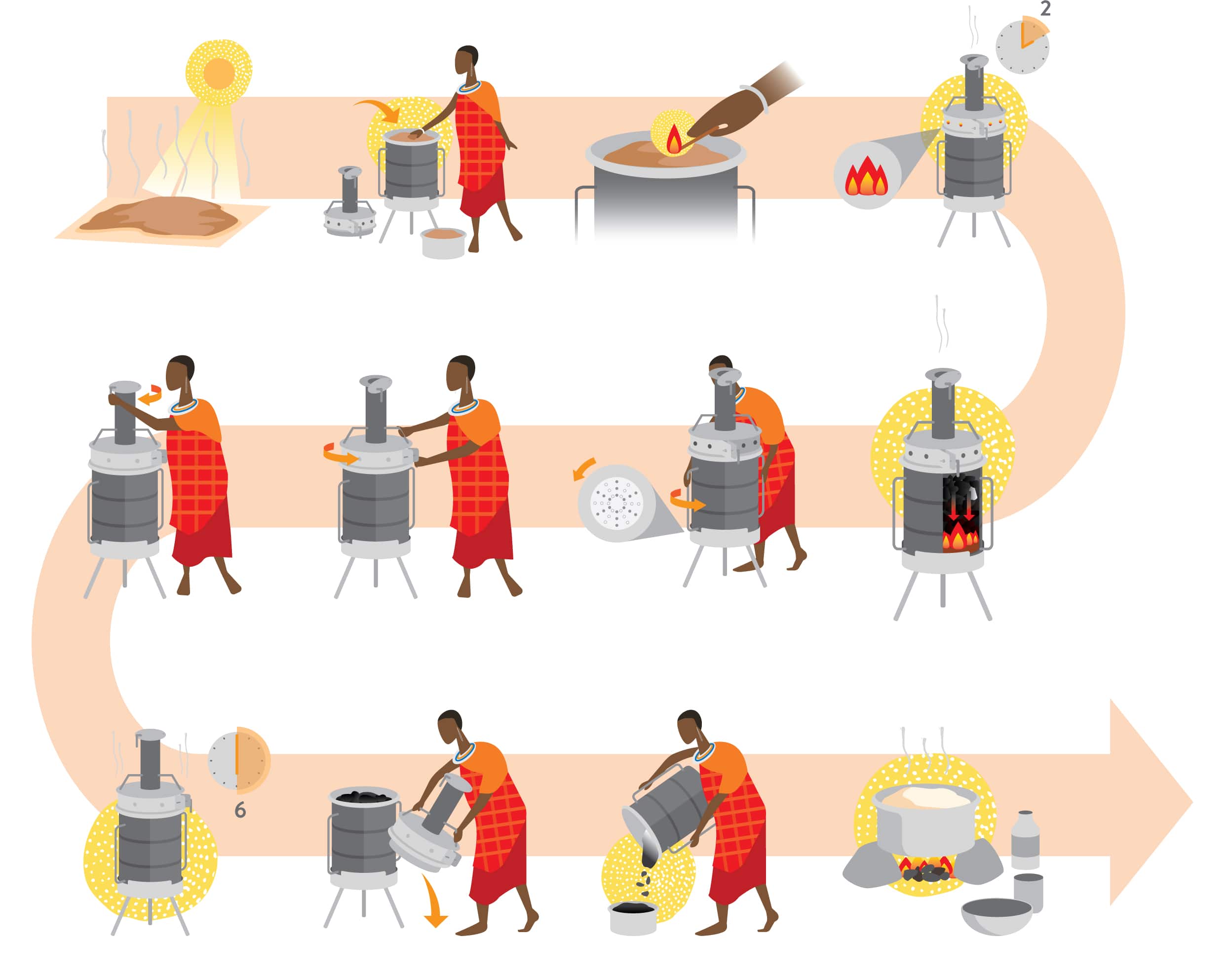 I am fortunate that Project Tembo has decided to pick up the project and I am currently working with them and other partners to realize the design. The next steps are to recreate the full-scale prototype in Tanzania with local manufacturers and to conduct further testing of the design in the field to see how it withstands regular use in the environment.

Fore more information on the project, feel free to read through my design report as well as checkout my research blog. 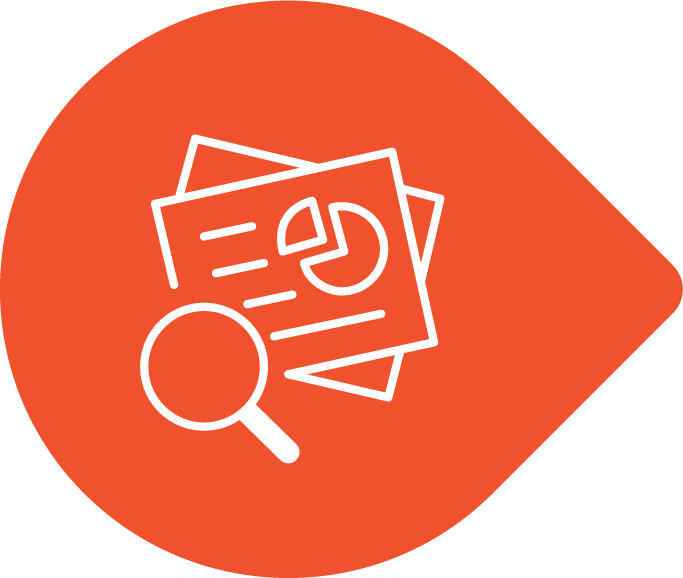 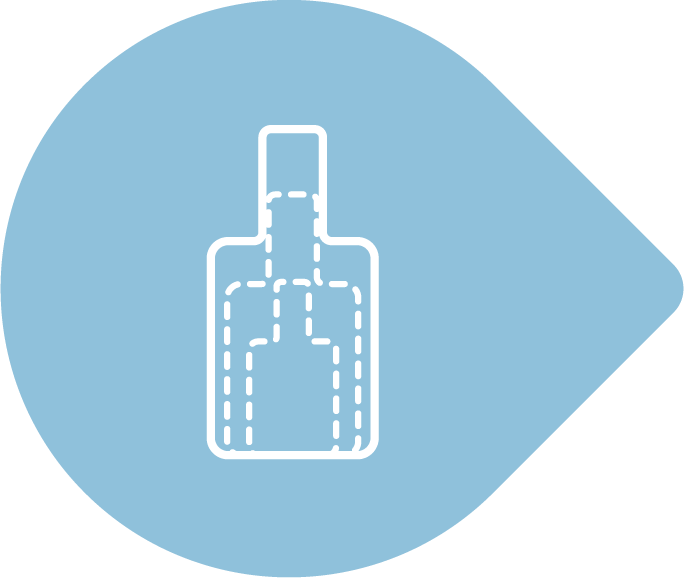 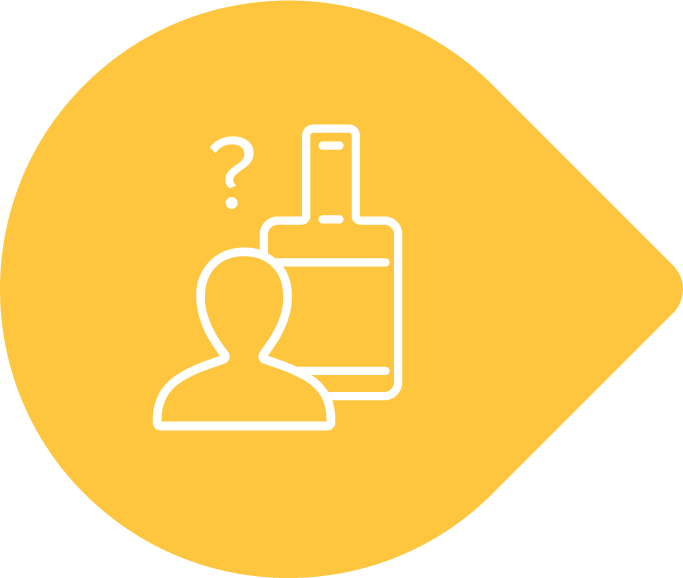